We made out alive...

We managed to get both our shows done with only minimal to slight permanent damage sustained. I'm not to sure how The Phoenix pulled up this morning though... it was like walking in to a seven day party on day six, right before the drinking starts again. Everyone was in high spirits though despite their mammoth efforts already and were all really keen to finish the party off in style! Thanks to all who made our all too brief stay something to remember.

After five of our seven gear lugs of the evening was complete, we were on stage at The Basement having a great time with a small but fantastic crowd of well-wishers and friends. It was quite a memorable night for a few reasons I would share with you, but what happens at the venue stays at the venue. Unless someone takes pictures of course.

After all this playing, we are pretty much raring to go for Summer Rhythm 2011. It's going to be an epic 3 days and if you aren't there, you are probably dead or in dire need of a life transplant! 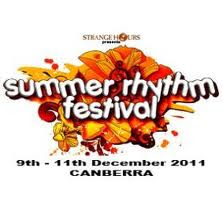 By Hence the Testbed - November 28, 2011 No comments:
Email ThisBlogThis!Share to TwitterShare to FacebookShare to Pinterest

But before I get to the birthday stuff... The Pot Belly on Saturday was a rollicking good time! Ben was an awesome host and everyone seemed to have a good vibe going. We heard a massive cheer go up while we were playing and for 2 seconds we thought people were actually listening. Turns out two chicks playing tonsil hockey up the back of the pub trump three weird looking dudes on stage any day, as well they should.

Cheers to Nick for making us all play the Fat Controller set. It was great fun! I still had a ball listening to you even though all my pesky wrong notes kept drowning you out.

Big thanks to The Bastard Sons of Liberty for punking the place right up until close. Talk about pro! The last note rung out -to the second- as last drinks turned to no more drinks. Well done boys!

Now, back to the birthday stuff. The Phoenix is all all growed up now so they are throwing a HUGE week long party. We are there on the 26th at 7pm before ducking off to The Basement to play at nine. Mental! But this Thursday the 24th there is also a little band called The Way Hip Antelopes playing alongside Pete and Fiete. I used to watch these guys play 10 years ago if not more. It will be like going back in time but with mobile phones! How cool is that?

By Hence the Testbed - November 21, 2011 No comments:
Email ThisBlogThis!Share to TwitterShare to FacebookShare to Pinterest

We love the Phoenix

Had another awesome night at the Pheonix on the 3rd. After taking a few songs to warm up the Jimmi Carr band went to town and back and then in to town once more. Go and track them down and make them play for you. NOW! Or later. What ever is convenient.

Also, a big thanks to the awesome dude that came up after the show and wanted to buy albums off us. It just goes to show if we did indeed have an album, we could sell a million of them if we did a million gigs and there was always a super cool guy who wanted to buy one after each.

The prize of a free beer didn't go off this time so I'll have to come up with a new competition for no-one to enter. Check our gig guide for more info. Or less info I guess if you are looking for info that isn't Hence the Testbed next gig related.
By Hence the Testbed - November 08, 2011 No comments:
Email ThisBlogThis!Share to TwitterShare to FacebookShare to Pinterest
Newer Posts Older Posts Home
Subscribe to: Posts (Atom)